Over the past month or so, Tom and I have both been feeling like TJ's numbers have been in range - some highs, but mostly solid numbers, with what feels like many lows scattered throughout. I was happily anticipating our three month check-in with the fabulous Deb at the Joslin Clinic, where I was sure we would be applauded for our wonderful diabetes management, and ability to bring his A1C so low.

And then I downloaded the pump.

Many solid numbers, sure - but also LOTS of highs, and some lows, but not nearly as many as I remember. His three month average BG was 180. A quick search on the internet indicated that his A1C would be 8. Eight.

I am not a person who loves to do errands, chores, tasks around the house. I put off any and all household tasks until the situation is dire. If it were up to me entirely, we would all do laundry only when no one had clean underwear. Somehow, the task of downloading the pump, crunching the numbers, and making adjustments has fallen into the same "oh yeah, gotta do that chore" as laundry. Which is ridiculous, really. And a little pathetic. Yes, it is an annoying, redundant chore, much like clothes-washing. But the results - better long-term health for my CHILD - are far better than clean underwear. And still, it falls by the wayside.

Today we met with Deb, and as the amazing web predicted, TJ's A1C was exactly 8.0, a number Deb was actually fine with. In the past, TJ has been both higher and lower than 8, and it is the top of the goal Joslin sets. It does still seem like a bit of a failure on our part, but there were many other successes: Deb is pleased with how active TJ continues to be, as well as his increased weight - something we have been working hard at. We were able to put additional opportunities for TJ to be independent into his school plans, something TJ was excited about, and Deb was all in favor of. Overall a good visit.

As for the A1C - we'll have to keep at it. Maybe download that pump each time we do a load of laundry.
Posted by Christine at 4:26 PM No comments:

Towards the end of Friday's outing to Woodneck beach, TJ's pump started emitting a sound not unlike the alarm that the national weather service puts out. Buried in his cargo shorts, under a towel, it was subtle, but persistent. We have had very few issues with the relatively new Animas, and the code "Call Service/Delivery Stopped" was a new one for us.
We were already considering our departure from the beach when the pump began alarming, so truly, this was not a day-ruining alarm. We made light of the situation, joked with our friends about the broken pump, and packed it in. Not that big of a deal. The situation was (eventually) remedied, with only one call to Joslin and two calls to Animas. In the scheme of "things that could go wrong with diabetes" this was a very small event.

But, still. At the beach, packing up early, in a slight panic, and with a kid I could tell was on the verge of a meltdown, I stood there smiling, putting on my happy mommy face. Why? Why do I always say "he's doing great" or "diabetes isn't that big of a deal" when in reality I want to scream "diabetes sucks, and I wish my kid didn't have it."

Obviously, diabetes isn't the end of the world. As I have said often, TJ is a very well adjusted, happy, athletic, amazing kid. Every now and then, though, I would like for him to not be the kid that leaves first. Not be the one sounding an alarm - literal or figurative. Not be the one counting carbs at the ice cream truck.

This spring has been diabetes-heavy. We have gone through spells where diabetes has truly been in the background, but these past few weeks have not been among them. Diabetes has been out front and center at baseball, requiring in-the-dugout site-changes and sometimes keeping him on the bench. It has been a presence at school with persistent highs. It has made itself heard at friend's houses, where sites have come out. And now, as summer is starting, it has insisted on interfering at the beach.

I'm sure the pendulum will swing again, and we will have a stretch of weeks where diabetes is tucked in the background, barely noticeable, and my smile and "oh, diabetes isn't that big of a deal" comment may be truthful. But not today.
Posted by Christine at 6:30 PM No comments:

Spring was chalk full of soccer, lacrosse, concerts, and school events, but summer is being ushered in, for sure, by baseball. Many, many nights watching a fantastic group of little guys play their hearts out. And every time this boy takes the mound and throws stikes, I can't help but think that he is showing diabetes who's boss. 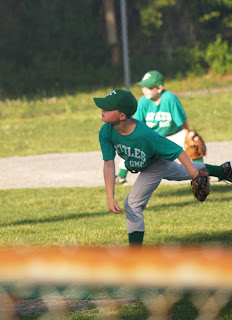 Posted by Christine at 9:33 PM No comments:

Beautiful morning on the boat; salt air, sun, family :: no lunch...blood sugar is too high, and we didn't bring a site change

Baseball game; a nail-biting tie featuring TJ as the saving pitcher :: a shot and the second site change of the morning...in the dugout right before the game

Celebrating the tie with flav-or-ice :: watching friends have flav-or-ice...it has too much sugar

Jumping on the trampoline with friends :: low...coming in for juice

Sunday morning; slow wake-up :: wet bed and high...too much juice the night before

Soccer game :: on the sideline at the start...chugging gatorade to bring up a low

One weekend :: Diabetes with him every minute
Posted by Christine at 9:25 PM No comments: 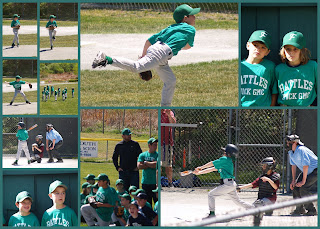 Posted by Christine at 9:45 PM No comments: 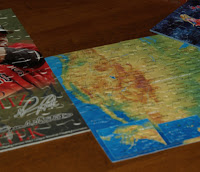 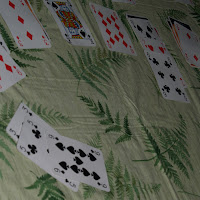 How quickly we settle into vacation. One day in, with Tom headed to Stellwagen in search of tuna, we settled into our slow paced routine of beach, reading, puzzles, and solitaire. I love how much my children were looking forward to Marshfield. The activities - the games, the beach trip - even the exact puzzles - have become a "tradition."
Posted by Christine at 8:10 PM No comments: 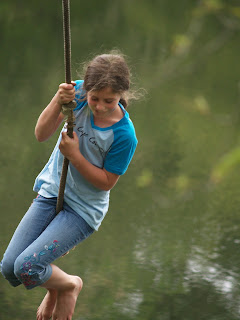 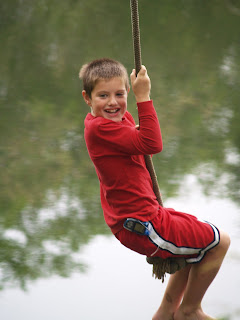 There does not seem to be anything that is more quintessentially summer than a rope swing. Pure summer love.

Both Gwen and TJ were so much more brave then I imagined they would be when we arrived at the swinging spot - letting the rope take them far out over the pond over and over.

Just by chance, TJ's cozmo insulin pump is right up front and center in the photos I took of him swinging. On the one hand, I love these photos - pictorial evidence that diabetes never holds him back. On the other hand, they are a reminder - diabetes with him, no matter the day.

Posted by Christine at 6:39 PM No comments: